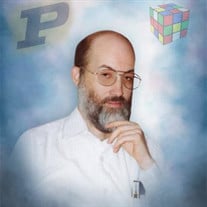 Donald W. Langel, 60, of Decatur passed away on Saturday afternoon, June 8, 2019, at Adams Woodcrest of Decatur. He was born on July 7, 1958 in Bluffton to William Kenton Langel and Phyllis Jane (Barnett) (Langel) Pease. A 1976 graduate of Southern Wells High School, Donald attended Purdue University and studied Communications. He enjoyed working as a board operator at the local radio stations in Lafayette and Bluffton. Donald served our country in the Unites States Army for 3 years, serving in Germany. Donald could be described as a planner and a dreamer that always wanted to make a difference. He continues to make a difference even in death by donating his body to I.U. Medical Center. He was a constant learner and loved trivia. Spending time with family was very important to him. He was a member in the NRA and AARP, and wanted his voice heard so others could benefit. Donald also enjoyed reading, riding his bike and could easily be found with a Rubik Cube in his hands. He was a member of the First Baptist Church in Decatur. Survivors include his mother Phyllis Pease of Bluffton along with siblings; Timothy (Linda) Langel of Berne, Sarah (Jonathan) Stutzman of Berne, Catherine (Kelley) Householder of Bluffton, Beth (Carl) Waterman of Coatesville, and stepsisters; Gloria (Noel) Phegley Columbia City, and Janet (Herb) Heyerly, Bluffton Indiana. He is also survived by 3 nieces & nephews; Bradley, Amanda & Melissa and 4 great-nieces & nephews; Samuel, Chelcie, Emma and Benjamin. He is preceded in death by his father, and stepfather John Pease. A service to celebrate Donald’s life will be held at 11 A.M. on Wednesday (June 12, 2019) at the Thoma/Rich, Lemler Funeral Home in Bluffton with calling hours held from 9 A.M. to 11 A.M., prior to the service. Memorials may be made to MDA Association. The family would like to thank the staff of Adams Woodcrest in Decatur and Family Lifecare for all their kindness during Donald’s care. Funeral arrangements have been entrusted to the care of the Thoma/Rich, Lemler Funeral Home in Bluffton. Friends can send online condolences to the family at www.thomarich.com.

Donald W. Langel, 60, of Decatur passed away on Saturday afternoon, June 8, 2019, at Adams Woodcrest of Decatur. He was born on July 7, 1958 in Bluffton to William Kenton Langel and Phyllis Jane (Barnett) (Langel) Pease. A 1976 graduate of... View Obituary & Service Information

The family of Donald W. Langel created this Life Tributes page to make it easy to share your memories.

Donald W. Langel, 60, of Decatur passed away on Saturday afternoon,...

Send flowers to the Langel family.