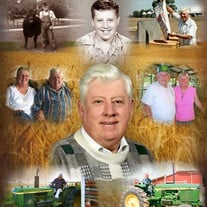 Donald D. Engle, 79, of Bluffton passed away early Sunday morning, March 10, 2019, at his residence. Don was born on July 6, 1939 in Wells County, Indiana to Dwight & June (Hedges) Engle and graduated from Petroleum High School in 1958. He served in the Indiana National Guard from 1957 to 1963. Don was a lifelong farmer in Wells County and was an avid supporter of the Wells County 4-H Program. He served as the Beef Barn Superintendent, 4-H Council, and was honored as the 4-H Parade Grand Marshall. Don was always passionate to help others learn about farming and livestock and was a member of the Indiana Farm Bureau. Don was a member of Living Water United Church. Don and Carol (Wheeler) Engle were married on April 20, 1963 at Old Salem United Methodist Church. Survivors include his wife Carol of Bluffton and children; Jill A. Engle of Fort Wayne, Tim (Michelle) Engle of Bluffton and Janet Leiser of Burlington, Kansas. Don was a loving grandpa to 5 grandchildren; Shaye (Dustin) Higgins, Shelby Engle, Sadie (Pedro) Silva, Lindsey Leiser and Jake Leiser and 4 great-grandchildren; Ryker Engle, Granger Higgins, Cambrie Higgins and Emmalyn Higgins and a brother, Kenneth (Jill) Engle of Bluffton. He is preceded in death by his parents and a twin brother, Ron Engle and a family friend, Linda Curtis. Calling hours will be held from 2 to 8 P.M. on Wednesday (March 13, 2019) at the Thoma/Rich, Lemler Funeral Home in Bluffton and for one hour prior to the service. Funeral services will be held at 10:30 A.M. on Thursday (March 14, 2019) at the Thoma/Rich, Lemler Funeral Home with Pastor Clark Stoller officiating. Burial will follow at Six Mile Cemetery in Bluffton. Memorials may be made to Family LifeCare or Wells County 4-H Program. Funeral arrangements have been entrusted to the care of the Thoma/Rich, Lemler Funeral Home in Bluffton. Friends can send online condolences to the Engle family at www.thomarich.com.

Donald D. Engle, 79, of Bluffton passed away early Sunday morning, March 10, 2019, at his residence. Don was born on July 6, 1939 in Wells County, Indiana to Dwight & June (Hedges) Engle and graduated from Petroleum High School in 1958. He... View Obituary & Service Information

The family of Donald D. Engle created this Life Tributes page to make it easy to share your memories.

Send flowers to the Engle family.