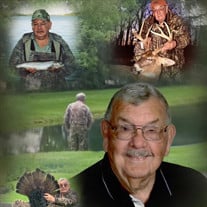 Donald “Don” K. Kiefer, 71 of Bluffton, passed away on Thursday morning, January 20, 2022, at Lutheran Hospital in Fort Wayne. He was born on October 10, 1950 in Bluffton to Woodrow W. & Lucille (Maddux) Kiefer. Don graduated from Bluffton High School with the class of 1969, and went to Golden Valley Lutheran College, where he received a scholarship to play college football. He worked for many years at Mix Mill and A.T. Ferrell in Bluffton, drove for Bluffton Metropolitan School District and Wabash Electric. Don loved to fish and hunt. He passed on this passion to his sons and grandchildren. Don was very active in the Wells County 4-H BB Gun & Rifle Club, where he served as an instructor since the mid 1980’s. He also coached youth sports for many years. On September 16, 1972, Don and Linda S. (Archbold) were married at St. Mark’s Lutheran Church in Uniondale, where Don was a longtime member. Survivors include his wife of almost 50 years, Linda of Bluffton and two sons; Eric (Angela) Kiefer of Bluffton and Kirk (Elizabeth) Kiefer of Corning, Ohio. He as a loving grandpa or know as PaPaw to 3 grandchildren; Alyssa, Kayla & Kole Kiefer. Don is also survived by a sister, Celia Kiefer of Bluffton and 2 brothers; Rex Kiefer and Tom (LaVerne) Kiefer, both of California, sisters-in-law; Marilyn Kiefer and Rita Kiefer and a brother-in-law, Hargis Sizemore. He is preceded in death by his parents and siblings; Fred Kiefer, Ronald Kiefer and Nina Sizemore. A service to celebrate Don’s life will take place at 10:30 A.M. on Tuesday (January 25, 2022) at the Thoma/Rich, Lemler Funeral Home in Bluffton. The Public is invited to attend the funeral service but there will not be any visitation hours held before or after the service. You can also view the service from the comfort of your home utilizing a Zoom Meeting. You can log on after 10:15 A.M. on Tuesday and use the Zoom Meeting I.D. # 856 6794 4880. The family prefers memorials be made in Don’s memory to the Wells County 4-H BB Gun & Rifle Club instead of sending flowers or gifts. Donations can be mailed to the funeral home. Don’s arrangements have been entrusted to the care of the Thoma/Rich, Lemler Funeral Home in Bluffton. Friends can send online condolences to the family at www.thomarich.com.

The family of Donald "Don" K. Kiefer created this Life Tributes page to make it easy to share your memories.

Send flowers to the Kiefer family.