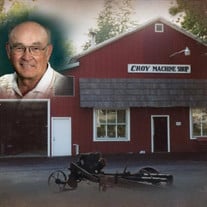 Donald L. Croy 88, of Vera Cruz passed away Saturday morning October 30, 2021 at River Terrace Estates. Don was born May 29, 1933, in Wells County to Clarence O. and Geneva Lucile (Gifford) Croy. Don was a 1951 Graduate of Bluffton High School. Don served his country in the U.S. Army, during the Korean Conflict. He owned and operated Croy Machine Shop in Vera Cruz for 25 Years, where he worked for 50 years. He was a member of the American Legion Post 111, and a member of the Six Mile Church where he served as trustee. Don was a former member of the Optimist Club, served on the Area Plan Commission and on the Vera Cruz town Board. He spent many winters in Sarasota Bay RV Park in Bradenton, FL, where he was active in the park wood shop, and community activities. On June 20, 1953, in Bluffton, Don married Phyllis Ann (Courtney). She preceded him in death on February 23, 2011. On August 28, 2012 Don and Virginia A. (Okuly) Hunnicutt were married. Survivors include his wife Virginia A. Croy of Vera Cruz, two daughters, Jill Diane Conley of Vera Cruz, Cheryl Ann (Larry) Andrew of Fort Wayne, a son-in-law Kent Park of Bluffton, a brother Jerry Croy of Fort Wayne, four grandchildren, Mikel Taylor, Chris Conley, Justin Park, Mackenzie Leyman, along with a great -grandson Carter Conley. Don was preceded in death by his parents, his first wife Phyllis Ann Croy, a daughter Penny Sue Park, a son-in-law Doug Conley, two sisters Pauline “Polly” Dubach and Judy Ann Cotton. Visitation hours will be from 4pm – 8pm Thursday, November 4, 2021 at the Thoma/Rich, Lemler Funeral Home in Bluffton and for one hour prior to the service at the church. Funeral Services will be at 11am Friday, November 5, 2021 at the Six Mile Church with Steve Studebaker officiating. Burial will follow at Six Mile Cemetery in Bluffton. There will be military rites provided by the U.S. Army and American Legion Post 111. Memorials may be made to the church. Funeral arrangements have been entrusted to the Thoma/Rich, Lemler Funeral Home. Friends can send online condolences to the family at www.thomarich.com.

The family of Donald L. Croy created this Life Tributes page to make it easy to share your memories.

Send flowers to the Croy family.