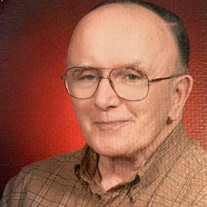 Donald Crots passed away January 3, 2020. Don was born on May 15, 1940 to Rhobe and Grace Crots. Don was 79 years old at the time of his passing, after a long and productive life and career in Ann Arbor Michigan where he was employed by the University of Michigan Athletic Department for over 38 years. Don enjoyed his many years at the University and was known to be the person that could be counted on day in and day out. He was a “person to set your watch by” as far as being on time and ready for the day, and never missing a day of work. Don was able to enjoy meeting many of the U of M Coaching staff as well as athletes over the years. He enjoyed automobiles and antique farm machinery and loved reminiscing about his childhood days of growing up on a farm in Monroe County, with his six siblings before moving to Ann Arbor, MI in 1962. Don was an active member of the Ann Arbor First Church of the Nazarene for over 40 years. He was an avid outdoorsman, who enjoyed being with his family on camping and fishing trips. Despite his physical handicaps/disabilities, Don became an avid snowmobiler during the 70’s and 80’s, cruised to Alaska, and spent time in small aircraft, including helicopters. Don never let his limitations slow him down in life and he never shirked a task. He was always known to be cheerful in all circumstances. Don is survived by his brothers Lyle (Marilyn) Crots of Ottawa Lake, MI. Lynn (Diane) Crots of Deerfield MI. Sister, Darlene (Tom) Creque of Decatur, IN. Brother Louis (Patricia) Crots of Florence, AZ. Brothers, Larry (Victoria) Crots of Wild Rose, WI and Leslie (Nancy) Crots of South Lyon MI. He is also survived by a very large group of Nieces and Nephews and Cousins that all knew him as “Duck”. who always enjoyed his time with his family and a good sense of humor. Don was preceded in death by his father Rhobe Crots and mother Grace Crots, both long time Ann Arbor area residents. Funeral services will be held on Saturday January 11, 2020 at Reeb Funeral Home, Sylvania, OH. Viewing and visitation to begin at 10am with the service immediately following at 11:30am. Burial will take place at Whiteford-Union Cemetery located Ottawa Lake, Michigan. Those wishing to offer memorials in Donald’s Memory, are asked to consider St. Judes Hospital for Children.

Donald Crots passed away January 3, 2020. Don was born on May 15, 1940 to Rhobe and Grace Crots. Don was 79 years old at the time of his passing, after a long and productive life and career in Ann Arbor Michigan where he was employed by the... View Obituary & Service Information

The family of Donald L Crots created this Life Tributes page to make it easy to share your memories.

Send flowers to the Crots family.