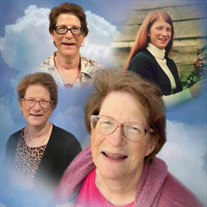 Debra “Debi” A. Graham, 65 of Bluffton passed away on Tuesday morning, May 18, 2021, at Lutheran Hospital in Fort Wayne. She was born on January 3, 1956 in Wells County, Indiana to Richard Eugene Osborn and Connie Jane Mosure. A 1974 graduate of Bluffton High School, Debi worked at Hook’s Drug Store for many years, Bluffton Pizza Hut and worked in the Latch Key Program at Lancaster Elementary for many years. She was a lifetime member of the Girl Scouts and served as a troop leader for some time. She was a very supportive mother and enjoyed watching her children play athletics, cheer and dance at Norwell High School. On December 27, 1986 in Bluffton, Debi and Patrick “Pat” W. Graham were married. Survivors include her husband Pat of Bluffton, a son Matthew P. Graham of Portage, MI. and a daughter, Stephanie K. Graham of Midolthian, Virginia. She is also survived by her mother, Connie Mosure of Bluffton and siblings; Rick L. (Denise) Osborn of TN., Craig L. (Gina) Osborn of Fort Wayne, Brenda K. Gardner of Bluffton, Chris E. Osborn of Bluffton and Jeffrey A. (Janet) Osborn of Ossian. She is preceded in death by her father, Richard Osborn. Funeral services will be held at 10:30 A.M. on Saturday, May 22, 2021, at the Thoma/Rich, Lemler Funeral Home in Bluffton with Pastor Gary Aupperle officiating. Burial will follow at Friends Cemetery in Rockford, Indiana. Calling hours will take place from 4 P.M. to 8 P.M. on Friday and for one hour prior to the service on Saturday at the funeral home. Memorials may be made in Debbie’s memory to the Wells County Historical Society or Friends of Ouabache State Park. Funeral arrangements have been entrusted to the care of the Thoma/Rich, Lemler Funeral Home in Bluffton. Friends can send online condolences to the family at www.thomarich.com.

The family of Debra "Debi" A. Graham created this Life Tributes page to make it easy to share your memories.

Debra “Debi” A. Graham, 65 of Bluffton passed away on Tuesday...

Send flowers to the Graham family.