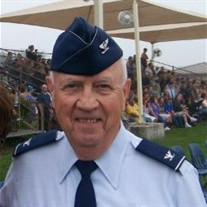 Col. David H. Stohler Ret., 81, died Weds. Feb 10. 2016 at Lutheran Hospital, Ft Wayne. David was born on the Stohler farm in Anderson, Indiana on June 2, 1934. He graduated from Markleville High School in 1952 . He married his wife Judith (Smith) on October 13, 1961. David retired as the Vice Wing Commander of the 122nd TFW, Ft Wayne, in 1989 after 34 years of service. During his time in service he logged over 3,600 hours of flight time in fighter jets and was deployed to Europe for the Berlin Crisis, he served 2 tours from a NATO base in Tripoli and worked with a pilot exchange program with Turkey and the West German Air Force. David passed on his military legacy to his son Col Michael Stohler, his daughter Michele Mechling, grandson Shane Quillen, grandaughter Ashley Canfield, grandson Kaleb Mechling and nephew Robert Gustin. He is survived by his wife Judith, his children: daughters - Lisa Bernarducci & Michele (Kevin)Mechling and son Michael Stohler (Michelle). He has 8 grandchildren and 3 great grandchildren. 2 sisters Grace (Harold) Markle and Faith (Jim) Burmeister. He is preceded in death by his parents Audrey and Henry Stohler, Step Father Roy Gooding, sisters Dellarose Gustin and Paula Nugent and brother Phillip. Funeral Services will be held at 5 p.m. on Sunday (February 14, 2016) at the First Church of Christ in Bluffton. Pastor Larry Sprinkle and Chaplain Michael Frese of the 122nd Fighter Wing will officiate. Calling hours will be held from 2 to 8 on Saturday at the Thoma/Rich, Lemler Funeral Home and for one hour prior to the service on Sunday at the church. Burial will take place at a later time at Elm Grove Cemetery. Memorials may be made to the First Church of Christ or to Mt Zion Lutheran Church in Anderson. Funeral arrangements have been entrusted to the care of the Thoma/Rich, Lemler Funeral Home in Bluffton. Friends can send online condolences to the family at www.thomarich.com.

The family of Col. David H. Stohler, Ret. created this Life Tributes page to make it easy to share your memories.