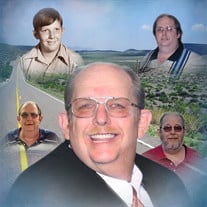 David D. “Foot” McCormick passed away early Wednesday evening January 15, 2020. David was born November 20, 1957 in Bluffton, IN to Kenneth D. and Alberta Colleen (Compton) McCormick. He was a 1976 graduate of Norwell High School. He was involved in the trucking business as a driver and dispatcher for a total of 30 years. David “Foot” is survived by his mother Alberta Colleen McCormick; two sons; Nick (Jennifer) McCormick of Henrico, VA, Douglas McCormick of Liberty Center, IN, a daughter April (Chris) Steffen of Bluffton, three grandchildren; Noah, Hannah, and Elizabeth, his siblings; Bob (Penney) Burns of Bluffton, Jon (Robin) Burns of Van Wert, OH, Debbie McCormick of Bluffton, Tim (Lisa) McCormick of Bluffton, Tammy (Andy) Wenning of Craigville, and Cindy Bates of Ossian, along with his loving nieces and nephews. He was preceded in death by his father Kenneth D. McCormick. Calling hours will be from 12 noon – 4pm Sunday, January 26, 2020 at Thoma/Rich, Lemler Funeral Home in Bluffton. A Memorial Service will be held at 4pm Sunday at the Funeral Home, with Tony Garton officiating. A private burial will occur at a later date. In addition to flowers, memorials may be made to the family. Funeral arrangements have been entrusted to the care of the Thoma/Rich, Lemler Funeral Home in Bluffton. Friends can share online condolences at www.thomarich.com

The family of David D. McCormick created this Life Tributes page to make it easy to share your memories.

Send flowers to the McCormick family.