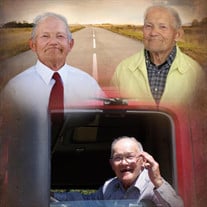 David D. Eckelbarger, 91 of Bluffton, passed away on Saturday evening, August 14, 2021, at his residence. He was born on December 28, 1929 in Huntington County, Indiana to Lawrence & Mary (Carter) Eckelbarger. David graduated from East Union Center High School and worked his entire career as an over the road truck driver. He started driving for Gerber Dairy and enjoyed driving for many years and retired driving for Ormsby Trucking Company. He attended the Bluffton Wesleyan Chapel in Bluffton. Survivors include his children; David W. (Ruthie) Eckelbarger of Bluffton, Ronald L. Eckelbarger of Montpelier, Diana M. (Ron) Uptgraft of Decatur, Debra S. (Jim) Streater of Carmel, IN, Sharon R. (Bill) Smith of Uniondale, Daniel J. (Karen) Eckelbarger of Craigville, Samuel D. (Lisa) Eckelbarger of Louisville, Elizabeth A. (Kevin) Fiebig of Freemont, Timothy L. Eckelbarger of Craigville along with 39 grandchildren, 67 great-grandchildren and 49 great-great-grandchildren. David is also survived by 4 sisters; Anna Belle McCartney of Bluffton, Marilyn (Don) Wilson of Markle, Nancy Adams of Beaverton, MI and Joyce Greene of Markle. He is preceded in death by his parents, spouse, Sarah Larita Eckelbarger, a brother, William Eckelbarger and a sister, Barbara Davidson. A service to celebrate David’s life will be held at 5 P.M. on Thursday, August 19, 2021, at the Thoma/Rich, Lemler Funeral Home in Bluffton. Pastor John Bigger and David’s son, Daniel J. Eckelbarger will officiate. Calling hours will be held from 2 P.M. to 5 P.M. on Thursday, prior to the service. Burial will take place at Oaklawn Cemetery in Ossian. Memorials may be made in David’s memory to the Bluffton Wesleyan Chapel and can be directed to the funeral home. Funeral arrangements have been entrusted to the care of the Thoma/Rich, Lemler Funeral Home in Bluffton. Friends can send online condolences to the Eckelbarger family online at www.thomarich.com.

The family of David D. Eckelbarger created this Life Tributes page to make it easy to share your memories.

David D. Eckelbarger, 91 of Bluffton, passed away on Saturday...

Send flowers to the Eckelbarger family.