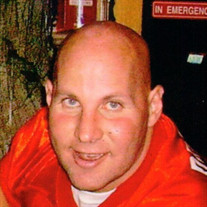 David M. Dreiband, 49, of rural Bluffton passed away at 12:30PM Saturday April 16, 2016 at his residence with his family by his side. David was born on August 17, 1966 in Indianapolis to Lawrence and Patricia (O’Connell) Dreiband. David graduated from Bishop Dwenger High School in 1986. David then studied at Hanover College and graduated in 1990. David married Kim Shawver on May 26, 2001 in Portland, IN. David had worked as a security officer at the Allen Co. Public Library and at the Lutheran Hospital, Fort Wayne. David was also a stay at home father to his three boys. David enjoyed watching football especially watching his sons play football and wrestling. David was a member of the Knights of Columbus Council 7555. David was a member of the St. Joseph Catholic Church, Bluffton. David is survived by his wife Kim (Shawver) Dreiband of Bluffton, Sons: Quinn, Connor and Luke, Mother Patricia Dreiband of Fort Wayne, Sisters: Kathy O’Connell of Louisville, KY, Debbie Dreiband of Indianapolis, Rachel (Eric) Bohnet of Indianapolis, Sandy (Viren) Chauhen of Fort Wayne, Krissy (Jim) Holden of Maryland, Brothers: Eric (Laura) of Potomac, MD, Mark (Denay) of Noblesville, Several Nieces and Nephews, David was preceded in death by his Father. A visitation will be held at the Thoma/Rich, Lemler Funeral Home 308 West Washington St. Bluffton on Tuesday April 19, 2016 from 2:00PM to 8:00PM. A Mass of Christian Burial will be held at the St. Joseph’s Catholic Church Bluffton on Wednesday April 20, 2016 at 11:00AM. Visitation will also be held an hour prior to the Mass at St. Joseph’s Church. Interment will follow in the St. Joseph’s Catholic Cemetery in Decatur. Memorials may be made in Honor of David to Kim Dreiband for the Dreiband boys’ college fund. Arrangements have been entrusted to the care of the Thoma/Rich, Lemler Funeral Home. Friends may share condolences at www.thomarich.com

David M. Dreiband, 49, of rural Bluffton passed away at 12:30PM Saturday April 16, 2016 at his residence with his family by his side. David was born on August 17, 1966 in Indianapolis to Lawrence and Patricia (O&#8217;Connell) Dreiband. David... View Obituary & Service Information

The family of David M. Dreiband created this Life Tributes page to make it easy to share your memories.

Send flowers to the Dreiband family.