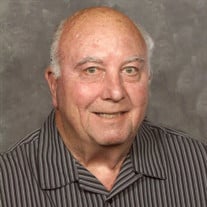 David F. Barnhart, 78 of Bluffton passed away early Sunday morning, October 1, 2017, surrounded by his loving family at his home in Bluffton. Mr. Barnhart was born April 13, 1939 in Dearborn, Michigan to Ann and Ralph Barnhart. He was raised in Dearborn, Michigan. He was a 1957 graduate of Roosevelt High School. He married Katherine LaVerne Junttonen on June 18, 1960. Mr. Barnhart received a BSME degree from Lawrence Tech University and held various supervision positions in the Engineering field. They included company positions with American Standard, Massey Ferguson, Gilmore & Tatge, Blont Agri and General Manufacturing. He also had an Associate Realtors license in Michigan. Locally, he was employed at Blont Agri and General Manufacturing where he retired in 2011. Dave enjoyed spending time with his family, traveling, shopping, fishing and watching football and basketball games. He was an avid Michigan fan. He was a member of the First United Methodist Church in Bluffton. Survivors include his son Todd (Laura) Barnhart of Highland, Michigan, daughters Shari (Steve) Person of East Lansing, Michigan and Julie (David) Certain of New Port Richey, Florida; six grandchildren, three great grandchildren; sister, Karen (Al) Norkunas of Dearborn Heights, Michigan. He was preceded in death by his wife Katherine after 54 years of marriage. A service to celebrate David’s life will be held at 6 P.M. on Friday, October 6, 2017, at the Thoma/Rich, Lemler Funeral Home. Rev. Steve Bard will officiate. Calling hours will be held from 4 to 6 p.m. on Friday, prior to the service. Memorials may be made to Family Life Care (Hospice) or Boys and Girl Club in Bluffton. Funeral arrangements have been entrusted to the care of the Thoma/Rich, Lemler Funeral Home in Bluffton. Friends can send online condolences to the family at www.thomarich.com.

David F. Barnhart, 78 of Bluffton passed away early Sunday morning, October 1, 2017, surrounded by his loving family at his home in Bluffton. Mr. Barnhart was born April 13, 1939 in Dearborn, Michigan to Ann and Ralph Barnhart. He was... View Obituary & Service Information

The family of David F. Barnhart created this Life Tributes page to make it easy to share your memories.

Send flowers to the Barnhart family.