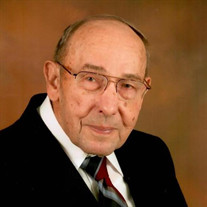 Darold B. Borne, 96, of Monroe, passed away Tuesday morning, January 23, 2018, at Bluffton Regional Medical Center in Bluffton. Darold was born on September 25, 1921 in Adams County to Albert & Loretta (Koledway) Borne. After his mother passed away at an early age, Darold and his twin brother were raised by his uncle and aunt, Wes & Clara (Borne) Mankey. He graduated from Kirkland High School with the class of 1940. He served the United States Army from 1942 to 1945. He was involved in the Battle of the Bulge, and for his service to our country was awarded the Bronze Star Medal and a Purple Heart Medal. He retired after 42 years at General Electric in Fort Wayne in 1984. He also worked for 20 years for Dick Coppess at Coppess Corner in Monroe. Darold was faithful member of the Monroe United Methodist Church and Monroe Lions Club. On May 1, 1948 in the Parsonage of the Monroe United Methodist Church, Darold and Helen Eileen (Rich) were married. They shared 68 years together before she preceded him in death on March 21, 2016. Survivors include a daughter Carol (Jim) Myers of Monroe and a son Ron (Terri) Borne of Decatur along with 4 grandchildren; Marsha (George) Coleman, Jill (Chad) McBride, Ben Myers, Melissa Myers and 11 great-grandchildren. Darold is preceded in death by his parents, wife Helen, his twin brother Donald W. Borne, grandson Mark Allen Borne and a half sister Helen Hemmelgarn. A service to celebrate Darold’s life will be held at 1:00 P.M. on Saturday (January 27, 2018) at the Monroe United Methodist Church. Pastor Char Allen will officiate. Calling hours will be held from 10 A.M. to the time of the service on Saturday at the Church. Burial will follow at Ray Cemetery in Monroe where military honors will be given to Darold by the United States Army Honor Guard and the American Legion Post Honor Guard. Memorials may be made to the Monroe United Methodist Church or Monroe Lions Club. Funeral arrangements have been entrusted to the care of the Thoma/Rich, Lemler Funeral Home in Bluffton. Friends can send online condolences to www.thomarich.com.

The family of Darold B Borne created this Life Tributes page to make it easy to share your memories.

Send flowers to the Borne family.