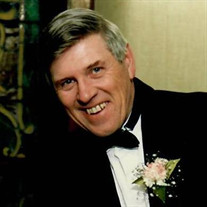 Darol B. Myers, 76, of Bluffton passed away at 10:30 P.M. Friday, January 26, 2018, at his residence surrounded by his family. He was born on February 12, 1941 at his home in Howard County, Indiana to Carl C. &. Frieda P. (Graham) Myers. The family moved to Wells County in 1949. He graduated from Petroleum High School in 1959. Darol worked at Franklin Electric from 1961-1965 and farmed from 1965 to 1969 and drove semi-truck from 1969 to 1975. In 1975, Darol purchased Pennville Feed and Grain and was the owner until 1992. In 1989 he started driving semi-truck for various companies and retired in 2009 from USF Holland Corp. of Indianapolis. He served his country in the United States Army National Guard for 6 years from 1963 to 1969. On April 11, 1986, Darol married Carol (Betz) Springer and she survives in Bluffton along with a step-daughter, Rebecca (Kelly) Thompson of Bluffton and a step-son Scott (Sally) Springer of Noblesville. He is also survived by his grandchildren: Lynsey Mawhir of Springhill, FL., Ryan Mawhir of Weeki Wachee, Fl., Megan Springer, Brody Springer and Lucy Springer from Noblesville. Along with brothers; Bryon (Betty) Myers of Pierceton, IN., William (Roberta) Myers of Elwood and a sister Markeeta (Roger) Wilson of Bluffton, a sister-in-law Janice Myers of Keystone and a special Niece Jennifer Pursifull. Darol is also survived by his pride and joy, who spent many hours on his lap, Kenzie a.k.a. Floppy Ears! He was preceded in death by his parents, a brother Merrill Myers and a niece Karen Lewis. A service to Celebrate Darol’s life will be held at 10:30 A.M. on Wednesday, (January 31, 2018) at the Thoma/Rich, Lemler Funeral Home in Bluffton with assistant pastor, Scott Springer officiating. Calling hours will be held from 2 to 8 P.M. on Tuesday at the funeral home and for one hour prior to the service on Wednesday. Burial will follow at Six Mile Cemetery in Bluffton. Memorials may be made to Family Life Care of Berne. Funeral arrangements have been entrusted to the care of the Thoma/Rich, Lemler Funeral Home in Bluffton. Friends can send online condolences to the family at www.thomarich.com.

The family of Darol B Myers created this Life Tributes page to make it easy to share your memories.

Send flowers to the Myers family.