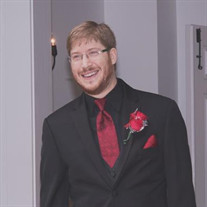 Daniel J. Wells 35, of Ossian, formerly of Elkhart, passed away Saturday August 8, 2020 at his home. Daniel was born February 18, 1985 in Goshen, IN to Michael R. and Dawn L. Wells (Hughes). On October 22, 2017 in Niles, MI Daniel married Jenna H. Moore. There are many words to describe Daniel, and some are even fit to print. Daniel embodied a perspective on life that saw many attempts to imitate. He loved few people, but did so fiercely; lived life with physical limitations, but no less zest and zeal; and pushed his friends to new heights when it came to innuendos with a well-placed, "Well, not with that attitude." He held many titles: son, brother, husband, best friend, and despite every attempt to achieve the opposite: a man with a heart of gold. Daniel attended Ball State University, matriculating in 2009 with a degree in Political Science and a particular focus on the study of international relations and terrorism. He tried and failed to speak German repeatedly and finally learned to pronounce "cinnamon," much to everyone's dismay. Despite his outstanding dedication to his studies, he still forgot who FDR was and we will never let him forget it, even if it was due to extenuating circumstances. He was often found pacing with a book in his hand or clicking through Wikipedia's random articles section in a constant attempt to deepen his knowledge of the world around him. A conversation with him would range from pop culture, to discourses on Hezbollah's influence in the US, to a segue to the intricacies of grammar (and why you're wrong), to an in-depth analysis of anime and video games, to what it meant to be human. Daniel's greatest achievements begin with his marriage to Jenna on October 22, 2017, who kept up with him better than the rest of us (though let's be fair, it's not like he could outrun us). He was an Eagle Scout who never failed to mention he could set up a shelter for us if we'd just give him a shovel and a tarp. He was one of the last survivors in a campus-wide zombie infiltration. He managed to travel outside the US without making a wrong turn into Canada. He quite possibly had the highest consistent charisma score ever seen in real life. Daniel worked as the Assistant Director of I.T. for the Wells County Government, where he likely had the highest mouse twitch rate in the entire office. Prior to this role, he supported Goodwill Industries of Michiana for 8 years. Daniel is survived by his wife Jenna; brothers Michael, Christopher (Carolyn Chang), Nicholas (Lilly Milianta); a half brother Matthew; a step-brother Steven Jacobs and a step-sister Jacquelyn Jacobs; and innumerable friends from across the globe. There will be a Memorial Service held at a later date. Jenna thanks you all for the thought, but begs you not to send flowers (unless you really have to). Instead, please consider making a donation to Riley Children's Hospital, without whose physicians we never would have had Daniel in our lives beyond his third day. See? He wasn't as bad as he was saying. Funeral arrangements have been entrusted to the care of the Thoma/Rich, Lemler Funeral Home. Condolences may be made at www.thomarich.com.

The family of Daniel J. Wells created this Life Tributes page to make it easy to share your memories.

Daniel J. Wells 35, of Ossian, formerly of Elkhart, passed away...

Send flowers to the Wells family.