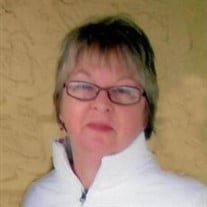 Cynthia K. Paxson, 71 of Bluffton, passed away on Thursday morning, July 22, 2021, at Bluffton Regional Medical Center. She was born on January 10, 1950 in Bluffton to Robert K. & Ruth E. (Arnold) Markley and graduated from Bluffton High School in 1968. While working at Macey’s Root Beer Stand in Bluffton, Cynthia met a young man, Tom E. Paxson. They were married at the First United Methodist Church in Bluffton on October 12, 1969. She worked at Farmer’s Home Administration in Bluffton and retired from Peyton’s Northern, where she worked for 13 years. Cynthia enjoyed quilting, her animals and spending time with her family and friends. Over the last several years, Cynthia and Tom enjoyed spending their winters in Florida. Survivors include her husband Tom of Bluffton and two children; Tonya (Brent) Oechsle of Fort Wayne and Mick Paxson of Bluffton. She was a loving grandma to 2 grandchildren; Sydnee (Jeffrey) Brooks of Wabash and Brendan Oechsle of Norfolk, NE., along with a brother, Gary L. (Diane) Markley of Bluffton. Calling hours will be held from 3 P.M. to 8 P.M. on Monday (July 26, 2021) at the Thoma/Rich, Lemler Funeral Home in Bluffton, and for one hour prior to the service. Funeral Services will be held at 11 A.M. on Tuesday (July 27, 2021) at the Thoma/Rich, Lemler Funeral Home in Bluffton with Rev. Lyle Breeding officiating. Burial will follow at Fairview Cemetery in Bluffton. Memorials may be made to the Friends of the Wells County Animal Shelter. Friends wishing to watch Cynthia’s service can do so from the safety of their home, utilizing a Zoom Meeting. You can login using Zoom Meeting I.D. # 842 7690 6120 and you can login after 10:45 A.M. on Tuesday, July 27, 2020. Funeral arrangements have been entrusted to the care of the Thoma/Rich, Lemler Funeral Home in Bluffton. Friends can send online condolences to the family at www.thomarich.com.

The family of Cynthia K. Paxson created this Life Tributes page to make it easy to share your memories.

Cynthia K. Paxson, 71 of Bluffton, passed away on Thursday morning,...

Send flowers to the Paxson family.