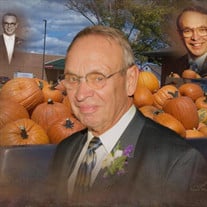 Clyde L. Shady, 82 of Bluffton, passed away Wednesday evening, November 11, 2020 at Bluffton Regional Medical Center. Clyde was born on August 8, 1938 in Wells County to Chester J. & Katherine R. (Wasson) Shady. He was a 1956 graduate of Lancaster High School. In 1954, Clyde started his lifelong customer service career with Farling’s Finer Foods. In 1965, Maloley’s purchased Farling’s where Clyde advanced to store manager in 1967. A position he held until 1982, when he moved to Eaton, IN., where he purchased his own grocery store. In 1984, he moved to Sparta, WI. to manage Ted & Fred’s Grocery Store. He managed Wise Way Grocery in Valparaiso from 1993 to 2003. Then he returned to Bluffton, where he was part of the original staff at Lowe’s, working in the paint and tool departments. Clyde finished his career in 2017 at the Bluffton Walmart stocking the bread shelves. Clyde was well-known for his gardening, especially his strawberries in the summer, and his pumpkins, squash, gourds and Indian corn in the fall. Clyde won numerous ribbons at the Street Fair each year for his produce. His garden was his “Happy Place”. Clyde was an active member of the First Baptist Church. He served on the Board of Deacons and the Trustees among other areas. He was active in the Bluffton Kiwanis, serving as President from 1971 to 1972. Clyde and Phyllis Farling were married on June 29, 1958 at the First Baptist Church. Survivors include his children; Kent (Deb) Shady of Bluffton, Kendra Shady of Jeffersonville, Kurt (Jennifer) Shady of Milford, MA. Clyde is survived by four grandchildren; Glen (Jessica) Shady, Craig (Shelby) Shady, Isabella Shady and Jasper Shady, along with five great-grandchildren; Elizabeth Shady, Hannah Shady, Claire Shady, Maddie Shady, Crosley Shady and a sixth great-granddaughter due in December. He is also survived by a brother, Bud (Gwen) Shady and a brother-in-law Larry (Karolyna) Farling of Bluffton. Clyde is preceded in death by his parents, a sister, Adell Shady, and his wife of 61 years, Phyllis, who passed away on April 20, 2020. Visitation will be from 1 to 3 P.M. on Tuesday, November 17, 2020 at the Thoma/Rich, Lemler Funeral Home in Bluffton. A celebration of Clyde’s life will be held at 3 P.M. Tuesday at the Thoma/Rich, Lemler Funeral Home in Bluffton. His grandsons, Craig Shady and Glen Shady, and Pastor Les Cantrell will be officiating. Burial will follow at Elm Grove Cemetery in Bluffton. Memorials may be made to French Christian Mission or Christian Care Retirement Community. The safety of the family and all visitors is our utmost priority. For everyone’s safety, we ask that you practice social distancing. Masks are required for visitation and for Clyde’s service. We appreciate your cooperation and patience. Funeral arrangements have been entrusted to the care of the Thoma/Rich, Lemler Funeral Home in Bluffton. Friends can send online condolences to the Shady family at www.thomarich.com.

The family of Clyde L. Shady created this Life Tributes page to make it easy to share your memories.

Send flowers to the Shady family.