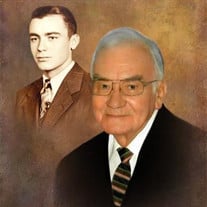 Clifford “Cliff” S. Rush, 93, of Poneto, passed peacefully on Sunday afternoon, April 8, 2018, at Heritage Pointe in Warren. He was born on February 3, 1925 in Wells County to Ivy & Augusta (Cupp) Rush. A lifelong resident of Wells County, Cliff graduated from Bluffton High School in 1943. He served in the United Sates Navy during World War II from 1944 to 1946. He worked at Bergman’s Repair Shop in Bluffton for 23 years and as a mechanic for Hiday Motors in Bluffton for 21 years, retiring in 1990. He was the President and caretaker of Grove Cemetery for many years along with working as the custodian for Poneto United Methodist Church for 33 years. He was a former member of Poneto United Methodist Church and a current member of Living Water United Church. On November 28, 1947 in Poneto, Cliff and Caroline (Smith) were married. They have shared the last 70+ years of marriage together. He is survived by his wife Caroline of Poneto along with his children; Steven (Kelli) Rush of Poneto, Rev. Dennis (Lana) Rush of Farmland and Gisele (Daniel) Schmit of Uniondale and 10 grandchildren and 18 great-grandchildren and a sister-in-law, Phyllis Rush of New Haven. He is preceded in death by his parents and two brothers, Kenneth & Richard and a sister Patricia Bratton. Funeral Services will be held at 11 A.M. on Thursday (April 12, 2018) at Thoma/Rich, Lemler Funeral Home in Bluffton with Pastor Clark Stoller officiating. Calling Hours will take place from 2 to 8 on Wednesday and for one hour prior to the service on Thursday at the funeral home. Burial will follow at Grove Cemetery in Poneto with military honors by the United States Navy and American Legion Post #111 of Bluffton. Memorials may be made to Living Water United Church or Poneto United Methodist Church. Funeral arrangements have been entrusted to the care of the Thoma/Rich, Lemler Funeral Home in Bluffton. Friends can send online condolences to the family at www.thomarich.com.

The family of Clifford S Rush created this Life Tributes page to make it easy to share your memories.

Send flowers to the Rush family.