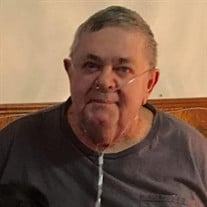 Clifford M. Bouchez, 75, of Decatur and former Bluffton resident, died on Monday morning, May 20, 2019, at Visiting Nurse & Hospice Home in Fort Wayne. He was born on October 2, 1943 in Peoria, IL. and adopted by Char & Louise (Conaway) Hawkins. He married Claudia R. “Rosie” Bouchez on October 30, 1999 in Bluffton. She preceded him in death on May 18, 2017. Cliff was a welder by trade and worked at Keystone Steel and Wire in Peoria and Rocky Flats Plant near Denver. He loved building things and working with his hands. Cliff loved the outdoors and was happiest when he and Claudia traveled in their RV. He was a true animal lover and always had many dogs and cats. Cliff received much joy from his pets throughout the years but most recently from resident therapy dog, Doc. Cliff’s current residence at Golden Meadows Residential Home of Decatur provided him with many new friends whom he dearly loved. Never one to take life seriously, Cliff was always goofing around and being silly. One always left with a smile on their face after visiting with Cliff. Survivors include his children: Christopher (Kathi) Hawkins of East Peoria, IL and Stephanie (Kenneth) Kemper Webb of Kearneysville, WV, along with 7 grandchildren; Richard Kemper, Matthew Kemper, Jessica Kemper, Ami Hawkins, Sara Hawkins, Adam Hawkins and Lauren Hawkins. Cliff is also survived by many siblings: Jeffrey Hawkins of Timewell, IL and Sharon (Richard) Mann of Frederick, IL; Bouchez brothers: Richard (Nancy) of Bluffton, Gill, David, and Carroll and sister Kay Brickner of Illinois. He was preceded in death by his parents and seven Bouchez siblings. A memorial service will be held at 1 p.m. Saturday, May 25, 2019 at the Golden Meadows Residential Home chapel. Memorials may be made to the Golden Meadows Special Needs Residents’ Fund (3646 North 200 East Decatur, Indiana 46733) or Visiting Nurse Foundation (5910 Homestead Rd, Fort Wayne, IN 46814). Arrangements have been entrusted to the care of the Thoma/Rich, Lemler Funeral Home in Bluffton. Online condolences may be left online at thomarich.com.

The family of Clifford M. Bouchez created this Life Tributes page to make it easy to share your memories.

Send flowers to the Bouchez family.