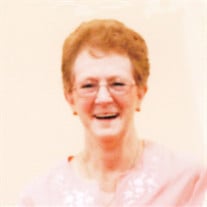 Claudia R. “Rosie” Bouchez, 70, of Bluffton passed away on Thursday morning, May 18, 2017, at Lutheran Hospital in Fort Wayne. She was born on February 1, 1947 in Huntington, Indiana to Noble G. & Lucille O. (DeHaven) Pinkerton. She graduated from Huntington High School and worked at Johnson Control in Ossian for 10 years and retired from Pretzel’s in Bluffton. She enjoyed watching movies, camping, fishing and spending time outdoors in her flower gardens. On October 30, 1999 in Bluffton, Claudia and Cliff M. Bouchez were married. She is survived by her husband Cliff of Bluffton along with five children: Christopher (Kathi) Hawkins of East Peoria, IL and Stephanie (Kenneth) Kemper Webb of Kearneysville, WV, Teresa (Shawn) Scott of Fairmount, IN, Steven Dailey of Alexandria, IN and Hazel Ann Hemer of Silverton, OR along with 15 grandchildren. Claudia is also survived by siblings: Diane (Ron) Hutchison of Columbus, Ohio, Connie (Steve) Craw of Gas City and Susan Disler of Fremont, Indiana. Funeral Services will be held at 11:00 A.M. On Tuesday (May 23, 2017) at the Thoma/Rich, Lemler Funeral Home in Bluffton. Friends are encouraged to visit with the family for one hour prior to the service. Memorials may be made to the family in care of the funeral home. Funeral arrangements have been entrusted to the care of the Thoma/Rich, Lemler Funeral Home in Bluffton. Friends can send online condolences to the family at www.thomarich.com.

The family of Claudia "Rosie" R. Bouchez created this Life Tributes page to make it easy to share your memories.

Claudia R. “Rosie” Bouchez, 70, of Bluffton passed away on Thursday...

Send flowers to the Bouchez family.