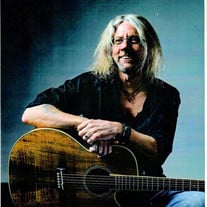 Daniel Ned Carnall “Chilly Addams” 49 of Fort Wayne passed away early Friday morning, December 13, 2019, at his residence. He was born on January 13, 1970 in Bluffton to Ned R. Carnall & Carol (Finley) Carnall. A 1988 graduate of Bluffton High School, Chilly was a professional musician and a solo acoustic guitarist. He played in Phil’s Family Lizard band for nearly 20 years. Chilly also worked as a disc jockey for Rock 104 and 98.9 The Bear in Fort Wayne. He previously worked at the Indiana State Highway Department and for Taylor Rental in Fort Wayne. For about 5 years, Daniel (Chilly), JJ Fabini and Jon Recker supported the reorganization of the Fort Wayne Derby Girls and became referees for the team. In 2006, Daniel took a trip to Gera, Germany as part of the Fort Wayne Sister City Program with the band “Onionskin” that was created especially for this trip. Music was his hobby as well as his profession, and he loved to play golf. Survivors include his mother Carol of Fort Wayne along with siblings: Deborah (Reber) Kozuch of Apex, NC; Christine (John) Schaefer of Greenfield, IN; Diane Carnall of Fort Wayne, and Andrew (Glinda) Carnall of Bluffton. He is also survived by several nieces and nephews: Jessica Kozuch, Charles Schaefer, Benjamin Schaefer, Allison (Derek) Fisher, Kirsten (Justin) Scheiman, Kaitlyn Roby, and Aaron Carnall. Daniel is preceded in death by his father, Ned in 2019 and his beloved son, Vincent Stone Carnall in 2002, and his brother-in-law, Joseph Kozuch in 2014. Calling hours will be held from 3 P.M. to 8 P.M. on Thursday at the Thoma/Rich, Lemler Funeral Home in Bluffton and for one hour prior to the service on Friday. A service to celebrate Daniel’s life will be held at 1 P.M. on Friday, December 20, 2019 at the Thoma/Rich, Lemler Funeral Home in Bluffton with Pastor Rick Hawks officiating. In Celebration of Chilly Addams, the Phoenix will be open to the public, family, and friends after the service. Doors will be open at 2 P.M. with a taco bar and live music in an open mic atmosphere. The Phoenix is located at 1122 Broadway, Fort Wayne, IN. A private burial will take place at Fairview Cemetery in Bluffton. Memorials may be made to the funeral home. Funeral arrangements have been entrusted to the care of the Thoma/Rich, Lemler Funeral Home in Bluffton. Friends can send online condolences to the family at www.thomarich.com.

The family of CHILLY ADDAMS Daniel Ned Carnall created this Life Tributes page to make it easy to share your memories.

Send flowers to the Carnall family.