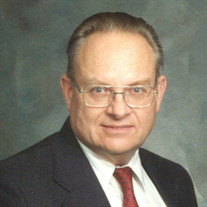 Charles J. Myers Jr. 88 of Bluffton, passed away Tuesday afternoon September 22, 2020 at River Terrace Estates in Bluffton. Charles was born in Bluffton July 2, 1932 to the late Charles J. Myers Sr. and Florence Mae Myers (Davison). Charles was a 1950 graduate of Lancaster Central High School. He graduated in 1964 with a degree in Electrical Engineering from Indiana Institute of Technology. In 1969 he became a Registered Professional Engineer in the State of Indiana in Electrical Engineering. On May 4, 1957 in Fort Wayne, Charles married Marilyn A. Franke. They shared 54 years of marriage before her passing on February 23, 2012. Charles worked at Myers Gun Shop in Bluffton. Indiana and Michigan Electric Company of Fort Wayne and Marion, Indiana and the City of Anderson, Indiana. He retired in 1993 from the City of Anderson as Superintendent of Municipal Light and Power Department. Charles enjoyed many old antique car festivals in the area, rarely missing any. He also enjoyed Genealogical study and family history. He is survived by two sons; Richard D. Myers of South Bend, IN, and William D. Myers, two grandsons, Jason L. Hodson of Portland, OR, Edward C. Myers of Port Orchard, WA, a great granddaughter Lily B. Hodson of Portland OR, a nephew Robert John Myers Jr. of Fort Wayne, IN, a niece Rhonda Shomo and cousin K.S. Durkett of Bluffton, IN and a sister-in-law Lola M. Myers of Webster, FL. Charles is preceded in death by his parents, his beloved wife Marilyn A. Myers on February 23, 2012, a brother Robert John Myers on June 22, 2011, along with many aunts, uncles, and cousins. There will be a Graveside Service at 11:00 am Monday, September 28, 2020 at Elm Grove Cemetery with Pastor Sherrie Drake officiating. The family would prefer memorials be made to the Salvation Army or a charity of their choice. Funeral arrangement have been entrusted to the Thoma/Rich, Lemler Funeral Home in Bluffton. Friends can send online condolences to www.thomarich.com

The family of Charles J. Myers Jr. created this Life Tributes page to make it easy to share your memories.

Send flowers to the Myers family.