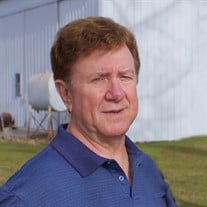 Charles “Bill” W. Perry, 76 of rural Bluffton, passed away on Friday, October 18, 2019, at Parkview Regional Medical Center in Fort Wayne. Bill was born on February 3, 1943 to Charles “Jake” & Mary A. (Osborn) Perry. He worked at Corning Glass and at Sterling Casting Company in Bluffton. Bill loved to bowl at the E-Z Bowl in Bluffton and at Spare Times Lanes in Berne. He loved to fish and work on many home repair projects and most importantly watching his Cubs. Bill was happiest when he was surrounded by his family! On May 15, 1976, Bill and Jeannie (Harden) Perry were married. Bill is survived by his wife Jeannie of Bluffton along with children; Neal (Betty) Perry of Decatur, Michaela (companion Mark Christman) Eltzroth of Markle, Jill (Charles) Grady of Wolcottville, Todd Perry of Fort Wayne and Lisa (Chris) Toney of Troy, Illinois, along with 9 grandchildren and 5 great-grandchildren. He is also survived by siblings; Dorothy (Gordon) Foltz of Fort Wayne, Mary Raudenbush of Berne and a brother-in-law Milos Henderson of FL. Bill is preceded in death by his parents, sisters Judy (Keith) Polston, Annitta Henderson and a brother-in-law, Jack Raudenbush. An open house to share memories of Bill will take place from 1 P.M. to 5 P.M. on Saturday (October 26,2019) at the family residence located at 6791 East State Road 218 in rural Bluffton. Memorials may be made in Bill’s honor to the American Heart Association or to the American Cancer Society, through the funeral home. Bill arrangements have been entrusted to the care of the Thoma/Rich, Lemler Funeral Home in Bluffton. Friends can send online condolences to the family at www.thomarich.com.

The family of Charles "Bill" W. Perry created this Life Tributes page to make it easy to share your memories.

Send flowers to the Perry family.