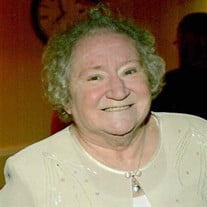 Charlene Gobernatz, 65, of Bluffton passed away on Thursday evening, September 5, 2019, at Bluffton Regional Medical Center. She was born on August 21, 1954 in Bluffton to Fred D. & Polly Ann (Combs) Burns. She attended Bluffton High School and retired from the housekeeping department at the Caylor – Nickel Clinic in Bluffton. Charlene attended the Church of Christ in Bluffton and always enjoyed spending time with her family. Survivors include 4 children; Rae Ann Smith, Elizebeth Gobernatz, Raymond Francis Gobernatz, III and Erica (Chad) Trobaugh, all of Bluffton along with 9 grandchildren and 4 great-grandchildren. Charlene is survived by her siblings; Philip ( Beatrice) Burns of Rydel, GA, Adrian (Doris) Burns of Bluffton, Eunice (Donald Lee) West of Bluffton, Denver (Tammy) Burns of Springfield, GA, Joyce Morgan of Pennville, Mary (Roger) Raugh of Geneva, Danny (Lisa) Burns of Warren, Christine Eisenhut of Bluffton and Cara Meadows of Bluffton. She is preceded in death by her parents and siblings; Fred Burns, Jr., Margaret Bailey, Carol Hurt and Paula McCollum. Calling hours will be held from 1 to 3 on Monday (Sept. 9, 2019) at the Thoma/Rich, Lemler Funeral Home in Bluffton. Services will take place following calling hour at 3 P.M. on Monday at the funeral home. Burial will follow at Elm Grove Cemetery in Bluffton. Memorials may be made to the family through the funeral home. Funeral arrangements have been entrusted to the care of the Thoma/Rich, Lemler Funeral Home in Bluffton. Friends can send online condolences to the family at www.thomarich.com.

The family of Charlene Gobernatz created this Life Tributes page to make it easy to share your memories.

Charlene Gobernatz, 65, of Bluffton passed away on Thursday evening,...

Send flowers to the Gobernatz family.