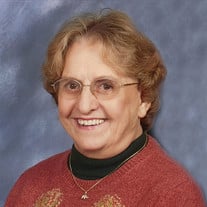 Carol Dean (Black) Hoffacker. Born March 2, 1931 in Bluffton to Herbert William & Martha (Travis) Black Mann. She married Stanley Hoffacker (he survives) June 1961. Surviving family members include her children Candace Hoffacker of New Haven, Stacy Hoffacker (companion Jennifer Barnes) of Indianapolis, Scott (Sarah) Hoffacker of Ft. Wayne, Steven (Wendy) Hoffacker of Indianapolis. So proud of her grandchildren Chloe, Clay and Grace Evelyn Hoffacker, A sister Andrienne Davies of Ft. Wayne, Sister-in-law Daphne Black, Nieces; Robin Rogers and (Jeff), Wendy (Heath) Schlagenhauf, Tonya (Frank) Aerts, Angela (Kary) Biberstein, along with great nieces; Danielle Biberstein and Paige Rogers. Also surviving are great nephews; Drake Biberstein, Dalton Rogers, Myles Aerts and Dane, Ryan and Cody Schlagenhauf. Besides her parents, she was preceded in death by her brother, Michael Black and brother–in-law Doyt Davies. A woman of steadfast energy, she was the president of her graduating class of 1949 from East Rockcreek Center High School. After graduation she worked at the Caylor-Nickel in the Hospital office. Several years later she became a medical assistant to the late Dr. Phillips. She also was a graduate of the McConnel Airline School in Minneapolis. She was employed by the American Import and Export Airline out of San Antonio TX, an airline that had a government contract to transport military personal. For many years she managed the Bluffton Auto License Branch. Active and interested she was appointed 4th district Young Republican. She organized the first charter Young Republican Club in Wells County with officers, Robert Skiles, Jack Edris, Beverly (Barrick) Hunter and Richard Marshall. She has been elected to the Rockcreek Precinct Committee chair person since 1969. Her grandfather was the first precinct committee person for Rockcreek Twp. until his death at which time her father was elected to that post and served until his death in 1969. One of the first County Chairperson to be elected in the State, a position she held for 18 years retiring in 1998. Because of her drive for good government, she promoted quality candidates and supported the two party system. She was bestowed the state’s highest award the Sagamore of the Wabash from Governors Robert Orr and Otis Bowen. Under Governor Orr she was appointed to the State Utility Regulatory Nominee committee for 4 years. An active member of St Mark’s Lutheran Church in Uniondale, she was the first woman to be elected to serve as Council President, and faithfully served the church for the last 40 years. Funeral services for Carol will be held at 10:30 a.m. on Saturday (April 15, 2017) at St. Mark’s Lutheran Church in Uniondale. Rev. Richard Vonesh will officiate. Burial will follow at Elm Grove Cemetery in Bluffton. Calling hours will be held from 2 p.m. to 8 p.m. on Friday at the Thoma/Rich, Lemler Funeral Home in Bluffton, and for one hour prior to the service at the church. Memorials may be made to St. Mark’s Lutheran Church, Juvenile Diabetes Research Foundation, or to the donor’s political choice of the Wells County Republican Party or Democratic Party. Carol’s arrangements have been entrusted to the care of the Thoma/Rich, Lemler Funeral Home in Bluffton. Friends can send online condolences to the family at www.thomarich.com.

The family of Carol D. Hoffacker created this Life Tributes page to make it easy to share your memories.

Send flowers to the Hoffacker family.