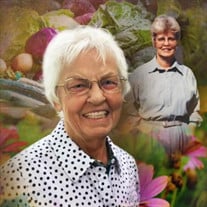 Carol Carnall, 82 of Fort Wayne, passed away Tuesday morning, May 5, 2020, at her residence with her family at her side. She was born on December 21, 1937, in Tipton County, Indiana to John Wesley and Mary (Winslow) Finley. Carol graduated from Rossville High School in 1955. After marrying and moving to Bluffton, she worked at the Wells County Highway Department and participated as an active member of Tri Kappa. After starting her family, she was involved with the Bluffton area Garden Club and took classes with the Wells County Creative Arts Council. Later, Carol enrolled at Purdue University – Fort Wayne and was graduated in 1988 with a degree in Interpersonal Business Communications. While in school, she worked part time as an academic guidance counselor for the university. Upon graduation, she went to work as the editor of Tri-County News and then served as an assistant manager for Star Financial Bank in Fort Wayne, where she worked for 12 years before retiring. Carol enjoyed quilting, photography and working in her flower and vegetable gardens. She was an officer on the Colony Bay Condominium Homeowners Association Board and took pride in making improvements in her community. Survivors include her children: Deborah (Reber) Kozuch of Apex, NC, Christine (John) Schaefer of Greenfield, Diane Carnall of Fort Wayne, and Andrew (Glinda) Carnall of Bluffton. She is survived by seven grandchildren: Jessica Kozuch, Charles Schaefer, Benjamin Schaefer, Allison (Derek) Fisher, Kirsten (Justin) Scheiman, Kaitlyn Roby, and Aaron Carnall, along with seven great grandchildren. She is also survived by a brother, Robert (Joan) Finley of Salt Lake City, UT. She is preceded in death by her parents, her son, Daniel Ned Carnall (Chilly Addams), a grandson, Vincent Stone Carnall, a son-in-law, Joseph Kozuch, and a brother, Richard Finley. Friends are encouraged to share their support for Carol’s family during a drive-thru style visitation that will be held from 1 to 3 p.m. on Saturday, May 9, 2020, at the Thoma/Rich, Lemler Funeral Home in Bluffton. The funeral home staff will assist guests as they arrive to greet the family from the safety of their vehicles. All guests are asked to remain in vehicles while at the funeral home. A private family service will take place after visitation on Saturday, with Pastor Rick Hawks officiating. Memorials may be made to Parkview Home Health & Hospice in Carol’s memory and can be sent to the funeral home. Funeral arrangements have been entrusted to the care of the Thoma/Rich, Lemler Funeral Home in Bluffton. Friends can send online condolences to the family at www.thomarich.com.

Carol Carnall, 82 of Fort Wayne, passed away Tuesday morning, May 5, 2020, at her residence with her family at her side. She was born on December 21, 1937, in Tipton County, Indiana to John Wesley and Mary (Winslow) Finley. Carol graduated from... View Obituary & Service Information

The family of Carol Carnall created this Life Tributes page to make it easy to share your memories.

Send flowers to the Carnall family.