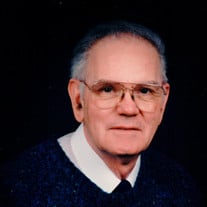 Calvin E. Towne, 87, of Bluffton passed away on Monday evening, April 17, 2017, at Parkview Regional Medical Center in Fort Wayne. He was born on May 19, 1929 in Xenia, Ohio to John H. & Nellie (Pickel) Towne. On December 16, 1950 in Rochester, New York, Cal & Marian I. (Lindsley) Towne were married. They have enjoyed 66 years together. Cal served his country in the United Sates Army from 1946 to 1949. He worked as an Engineer at Franklin Electric in Bluffton for 18 years, retiring in 1991. He was a professor at Ivy Tech in Fort Wayne for over 20 years. Cal was a master electrician. He owned and operated Town Electric in Bluffton for over 35+, working with the City of Bluffton on many projects. He was a faithful member of the Bluffton First Church of the Nazarene and was very active in the Work in Witness Mission Projects in many different countries. He enjoyed going on mission trips to build churches, overseeing the electrical part. Survivors include his wife Marian of Markle along with children: Calvin (Linnea) Towne of Springboro, Ohio, Gerald W. (Theresa) Towne of Markle, Steve (Mary) Towne of Poneto, Carol (Ruben) Rodriguez of Justin, Texas, Sharon (Randy) Eskew of Fort Wayne, Joanne (Scott) Landers of Bluffton and Susie (Ken) Towne-Powell of Ossian. He is also survived by 34 grandchildren and 37 great-grandchildren. He is preceded in death by a daughter Marian E. Girod in 2002. Cal’s calling hours and service will both take place at the church he loved, Bluffton Church of the Nazarene, 1515 Clark Avenue in Bluffton. Calling hours will be held from 2 to 8 P.M. on Friday with the funeral service at 10 A.M. on Saturday (April 22, 2017) at the Bluffton Church of the Nazarene, with calling for one hour prior to the service. Rev. Tim Miller will officiate. Burial will follow at Elm Grove Cemetery in Bluffton with military honors by the American Legion Post #111 of Bluffton and the United States Army Honor Guard. Memorials may be made to Bluffton First Church of the Nazarene c/o Work in Witness – DR Project. Funeral arrangements have been entrusted to the care of the Thoma/Rich, Lemler Funeral Home in Bluffton. Friends can send online condolences to the family at www.thomarich.com.

The family of Calvin E. Towne created this Life Tributes page to make it easy to share your memories.

Calvin E. Towne, 87, of Bluffton passed away on Monday evening,...

Send flowers to the Towne family.