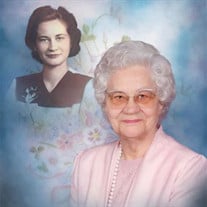 Birdena Nadine Day, 98 of Bluffton passed away at 4:30 a.m. Saturday, March 04, 2017, at Christian Care Retirement Community. She was born on January 24, 1919 in Sioux County, Nebraska to Edwin John & Daisy May (Gephart) Voigt. She graduated from Sioux County High School in 1934 and graduated from Manchester College in 1938 with a teaching degree. She was a English teacher and also taught Art and Physical Education at Coesse and Albion High Schools. Birdena taught released-time Bible classes at Liberty Center Elementary School from 1961 to 1973. She was a very talented artist. She painted many pieces and enjoyed displaying her acrylic, oil and water color paintings at her own show at the Creative Arts Center in 1982. Birdena has been a member of Liberty Center Baptist Church for 70 years, and taught Sunday School until she turned 90 years old, and was active with the Bible School Program. She served on the decorating committee at the church and grew flowers for the church in her garden for many years. She was a member of the Homemakers Club for almost 60 years, where she served as the President and was selected “Woman of the Year” in 1986. In addition, she was also awarded “Woman of the Year” from the Business and Professional Women’s Club. Birdena was instrumental in Child Evangelism Fellowship in Huntington, Wells, Adams and Jay County, holding the first meeting in her home. On May 20, 1944 in the Army Chapel in Chandler, Arizona, Birdena and Charles E. Day were married. They shared 46 years together before he preceded her in death on April 12, 1990. Survivors include a son William E. Day and a daughter Joyce (Dennis) Accavallo, both of Bluffton along with a daughter-in-law Pam (Joe) Day Meadors of Indianapolis along with six grandchildren: Lindsey (Eric) Romack of Indianapolis, Kevin (Shannon) Day of Chicago, IL., Mitchell Day of Indianapolis, Charles Accavallo of Nashville, TN., Anna Day of Oregon, IL. and Allison Day of Charlottesville, VA., along with two great-grandchildren: Ava & Dax Romack. She is preceded in death by a son Kent O. Day in 2006 along with a brother Lloyd Voigt and a sister Marguerite Fiandt. Funeral services will take place at 10:30 A.M. on Saturday (March 11, 2017) at the Liberty Center Baptist Church. Pastor Aaron Westfall will officiate. Calling Hours will be held from 4 to 7 P.M. on Friday at the Thoma/Rich, Lemler Funeral Home and for one hour prior to the service at the church. Burial will follow at Mossburg Cemetery in Liberty Township, Wells County. Memorials may be made to the Liberty Center Baptist Church or Child Evangelism Fellowship. Friends can send online condolences to the family at www.thomarich.com.

The family of Birdena N Day created this Life Tributes page to make it easy to share your memories.

Send flowers to the Day family.