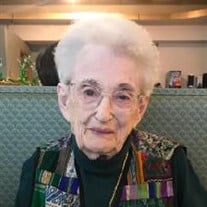 Beverly Buckner, 93 of Bluffton, passed away Wednesday, December 2, 2020 at River Terrace Retirement Community. Bev is the daughter of Franklin B. and Grace (Baker) Buckner. She is a graduate of Bluffton High School, Purdue University and Michigan State University. Bev worked for the Caylor-Nickel Medical Center as the Chief Medical Technologist, Special Projects Director, Personnel Director and in other capacities for 35 years. In 1973, Bev was recognized as the Medical Technologist of the Year in Indiana. She was a founding member of the Creative Arts Council of Wells County, a Charter member of the Women’s History Museum of Washington, D.C. and a member of the Alpha Mu Tau Honorary Society. Bev served as a board member for the Wells County Foundation, the Bluffton-Wells County Library, and was a chairman of the CLA Comm of NAACLS. She was a Past-President of the Wells County Cancer Society. Bev was a member of the Foltz-Bay View Reading Clube and Yokefellow. She was a dedicated conservationist, supporting wildlife, parks and concerned citizens. She wanted to ensure that hungry children were fed. Bev was known an amateur mycologist, an avid mushroom hunter and a world traveler. Bev is survived by a niece Sally A. Buckner of Bluffton, nephews; S. Scott Kumpf of Austin, TX., Michael Kumpf of Cortland, NY and Bradley Buckner of Kodak, TN, along with many great-nieces and great-nephews. Bev is preceded in death by her parents, a brother, Edward, a sister Barbara Kumpf and a nephew Bruce. Per Bev’s request, a private family graveside service will take place at Elm Grove Cemetery with Jeff Lemler officiating. Memorials may be made to the Wells County Public Library or the LiGHT Fund, payable to the Wells County Foundation. Funeral arrangements have been entrusted to the care of the Thoma/Rich, Lemler Funeral Home in Bluffton. Friends can send online condolences to the family at www.thomarich.com.

Beverly Buckner, 93 of Bluffton, passed away Wednesday, December 2, 2020 at River Terrace Retirement Community. Bev is the daughter of Franklin B. and Grace (Baker) Buckner. She is a graduate of Bluffton High School, Purdue University and Michigan... View Obituary & Service Information

The family of Beverly Buckner created this Life Tributes page to make it easy to share your memories.

Send flowers to the Buckner family.