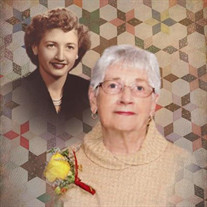 Betty J. Gregg, 94 of Ossian and formerly of Bluffton, passed away Thursday, September 16, 2021 at Ossian Health & Rehab. She was born on November 15, 1926 in Roanoke, IN to Frank & Rosella (Powell) James. Betty attended Bluffton High School. On December 24, 1942 Betty and Linn E. Gregg were married in Bluffton. They celebrated 64 years of marriage prior to his death on March 1, 2007. Betty owned and operated Eve’s Place restaurant in Ossian during the 1970’s. She also worked as an assembler for Magnetek in Huntington, retiring in 1990. She enjoyed traveling the country in their camper, quilting, crocheting, gardening, cooking, and her family. Betty was a member and past Worthy Matron of the Eastern Star and a past President of the American Legion Auxiliary. She was a life time member of the First Baptist Church of Bluffton. Betty is survived by her three sons; Robert C. (Karen) Gregg of Linthicum, MD, Bruce A. (Joy) Gregg of Ossian and William E. (Teresa) Gregg of Aurora, IN; six grandchildren and five great-grandchildren, along with two sisters-in-law, Helen V. Miller of New Castle and Kay Talkington of Phoenix, AZ. She is preceded in death by her parents, her husband, Linn, a son Linn E. “Gene” Gregg Jr., two brothers, John & Jack James, four sisters, Mary E. James, Helen F. James, Ruby P. Huffman and Thelma J. Lehman. Visitation will be from 4pm – 8pm Monday September 20, 2021 at the Thoma/Rich, Lemler Funeral Home. Services will be held at 11:00am Tuesday September 21, 2021 with an hour of visiting prior to the service also at the funeral home with Rev. Lyle Ewing officiating. Burial will follow at Elm Grove Cemetery. Memorials may be made to the First Baptist Church in Bluffton. Funeral arrangements have been entrusted to the care of the Thoma/Rich, Lemler Funeral Home in Bluffton. Friends can send online condolences to the family at www.thomarich.com.

The family of Betty J. Gregg created this Life Tributes page to make it easy to share your memories.

Betty J. Gregg, 94 of Ossian and formerly of Bluffton, passed...

Send flowers to the Gregg family.