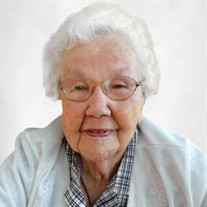 Betty Lou (Wilson) Cary, 98, of Bismarck, Ill., passed away Tuesday, Sept. 28, 2021, at River Terrace Estates in Bluffton, Indiana. Betty was born July 30, 1923, according to her mother and father, Phyllis Opal (Carter) and Clarence Orville Wilson. (Doctor and birth certificate indicated July 31, which was disputed throughout her life.) She was united in marriage Dec. 24, 1943, to Harold Kenneth Cary in Bismarck. He preceded her in death following 66 years of marriage May 20, 2009. A graduate of Bismarck High School, Betty went on to attend business school and served as the bookkeeper for Cary Construction. Along with her husband, she was a Scout Master and member of the Home Bureau. Following retirement, they spent 42 years wintering in Naples, Fla., and traveling the United States and Canada in their Airstream. Locally, she was a member of the Uniondale United Methodist Church. She enjoyed many hours of knitting, puzzles, and crafting. She also enjoyed collecting commemorative spoons and hummingbird keepsakes. Betty is lovingly survived by her children, Sharon (Jeff) Espich of Uniondale, and Terry (Bonnie) Cary of Ruskin, Fla. She has four grandchildren, Lisa Harville, Christian Cary, Cari (Seth) Whicker, and Kimberly Espich (Chad) Helm; 15 great-grandchildren; and five great-greatgrandchildren. All of the family will fondly remember her delicious peach cobbler, stove-top popcorn, and French toast. She was preceded in death by her husband and parents; a brother, Howard (Joan) Wilson; three sisters-in-law; and a grandson. Visitation will be held at 10 a.m. Tuesday, Oct. 4, at Sunset Funeral Home, 3940 N. Vermillion St. Danville, Ill. A celebration of her life will take place in the same location at 11 a.m. Following the service she will be laid to rest at Spring Hill Cemetery.

The family of Betty L. Cary created this Life Tributes page to make it easy to share your memories.

Send flowers to the Cary family.