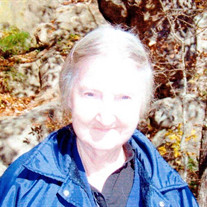 Bertha E. Patterson, 90, of Bluffton passed away at 12:02 p.m. on Friday, October 2, 2015, at her residence. She was born on May 14, 1925 in Etty, Kentucky to George and Gracey (Fleming) Fleming. She attended a one room school house until the 8th grade. On October 16, 1942 in Jenkins Kentucky, Bertha married Joseph Glen Patterson, he preceded her in death in 1964. They moved from Kentucky to Ohio and then to Bluffton in 1964. Bertha worked for the Estey Piano Factory, Housekeeping at the Caylor-Nickel Clinic, Kitco Mfg., Westhaven Nursing Home, Meadowvale Health and Rehab Center and also Home Health Care. She was a member of the Bluffton Church of God. She enjoyed traveling, loved gospel bluegrass music and working in her flowers. She loved spending time with her family and watching her favorite red birds. She is survived by her children; Patsy (Benny) Fields of Bluffton, Jackie (Irene) Patterson of Kenvir, KY, Diane (Richard) Eubank of Markle, Candy (Ronald) Daugherty of Atwater, CA, Linda Browning of Jacksonville, FL. She was a loving grandma to 16 grandchildren and 30 great-grandchildren and 25 great-great grandchildren. She is survived by two sisters: Vernie Johnson of Virgie, KY, Hazel Meade of Jackhorn, KY, and two brothers: Dave Fleming of Virgie, KY and Chandler (Kathy) Fleming of Durand, MI. She is preceded in death by a sister Alpha Elswick and two brothers: James “Buddy” Lloyd Fleming and Herman Fleming. Funeral services will be held at 10:30 a.m. on Tuesday (October 6, 2015) at the Bluffton Church of God with calling for one hour prior to the service. Pastor John Roe will officiate. Calling hours will be from 2 p.m. to 8 p.m. on Monday at the Thoma/Rich, Lemler Funeral Home. Burial will take place at the Fairview Cemetery in Bluffton. Memorials may be made in Bertha’s memory to the Bluffton Church of God. Funeral arrangements have been entrusted to the care of the Thoma/Rich, Lemler Funeral Home in Bluffton. Friends may send online condolences to the family at www.thomarich.com.

Bertha E. Patterson, 90, of Bluffton passed away at 12:02 p.m. on Friday, October 2, 2015, at her residence. She was born on May 14, 1925 in Etty, Kentucky to George and Gracey (Fleming) Fleming. She attended a one room school house until... View Obituary & Service Information

The family of Bertha E. Patterson created this Life Tributes page to make it easy to share your memories.

Send flowers to the Patterson family.