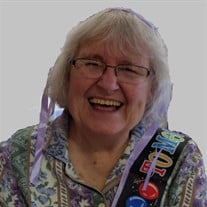 Barbara Eileen (Johnson) Trubey, 95 of Bluffton, passed away on Saturday, December 18, 2021 at Lutheran Hospital in Fort Wayne. Barbara was born on June 7, 1926 in Marion, Indiana to Dr. Garold L. and Lois I. (Trostle) Johnson. She graduated from Bluffton High School in 1944. On February 15,1947 in Bluffton, Barbara and Dr. C. William Trubey were married. Together they shared 54 years of marriage, until his passing in 2001. Barbara had a beautiful singing voice and sang in the Jay Gould’s Children’s Choir and later had her own program on WOWO as Bobbie Blaine the Voice of Fort Wayne, singing top 100 hits. She also performed in USO shows, Tri Kappa Red Stocking Follies and Wells Community Theater productions of the Music Man, Oklahoma, Sound of Music, and Guys and Dolls. She was a member of the First Presbyterian Church in Bluffton and sang in the choir. She was a long time member of the Bluffton Lions Club and was a past president. Barbara served on several eye missions with her husband, Dr. Bill Trubey, with VOSH in Honduras, Guatemala, and the Dominican Republic. Barbara also worked with her husband in his Optometry practice. In her later years, Barbara enjoyed reading and was co-owner and proprietor of Robin’s Nest Furniture in Bluffton. Survivors include her children: Steven K. Trubey of Geneva, Robin (Jack) Thornburgh of Bluffton, Gordon M. Trubey of Brooklyn, NY and Elizabeth E. Trubey of Bluffton, two grandsons: Benjamin (Carrie) Thornburgh of Warsaw and Daniel (Christen Gottschlich) Thornburgh of Sunnyvale, CA and two great-grandchildren: William and Eilene Thornburgh of Warsaw. Barbara was preceded in death by her parents, her husband Bill, a son Charles W. Trubey, Jr. and a daughter-in-law Janet S. Trubey. Public graveside services will be held Monday, December 27, 2021 at 2:00pm with Pastor Lyle Ewing officiating at Elm Grove Cemetery. Masks are preferred. Memorials may be made in Barbara’s name to Leaderdogs for the Blind or to the Bluffton Lion’s Club. Funeral arrangements have been entrusted to the care of the Thoma/Rich, Lemler Funeral Home in Bluffton. Friends can send online condolences to the family at www.thomarich.com.

Barbara Eileen (Johnson) Trubey, 95 of Bluffton, passed away on Saturday, December 18, 2021 at Lutheran Hospital in Fort Wayne. Barbara was born on June 7, 1926 in Marion, Indiana to Dr. Garold L. and Lois I. (Trostle) Johnson. She graduated... View Obituary & Service Information

The family of Barbara Eileen Trubey created this Life Tributes page to make it easy to share your memories.

Send flowers to the Trubey family.