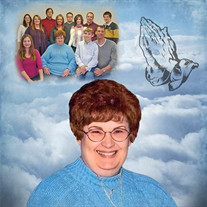 Barbara J. French, 77, who resided in Wells County, died peacefully Saturday afternoon August 25 at Markle Health and Rehabilitation Center. She was born on October 7, 1940 in Bluffton Indiana to George E. Miller and Leona L. (Keller) Miller. Barbara grew up and spent her early years in Bluffton, where she graduated from Bluffton High School in 1958. In 1959, Barbara married C. Thomas French. They were divorced after 23 years. She was preceded in death by her father, mother, and a sister Phyllis Jean (Miller) Bailer. Barbara retired to Lancaster Senior Apartments in Bluffton Indiana in 2005, and then moved to Markle Health and Rehabilitation in 2015. She had been a Store Manager at Women’s World (Fort Wayne, IN) and a Manager at Capri Meadows Apartments (Bluffton, IN). She was also a member of the First Baptist Church (Bluffton, IN). Surviving are sons, Michael A. French (wife Rachel), Douglas B. French (wife Lynn); daughter, Angela A. (French) Moreau (husband Paul); and six grandchildren, Falon M. French, Douglas C. French, Cassandra E. Moreau, Joshua P. Moreau, Alisha L. Moreau, and Thomas T. French. Services will be at 12:00 Noon on Wednesday (August 29,2018) at Thoma/Rich, Lemler Funeral Home with Pastor Les Cantrell officiating. Burial will be in Fairview Cemetery. Calling hours will take place prior to the service from 10 AM to 12 Noon on Wednesday. Memorials may be made in Barbara’s memory to the First Baptist Church. Funeral arrangements have been entrusted to the care of the Thoma/Rich, Lemler Funeral Home in Bluffton. Friends can send online condolences to the family at www.thomarich.com.

The family of Barbara J French created this Life Tributes page to make it easy to share your memories.

Send flowers to the French family.