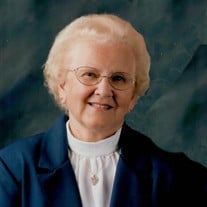 Anna Leona (Brown) Johnson, 91, passed away at 3:30 a.m. Monday, October 5, 2020 at Bluffton Regional Medical Center. She was born in Maumee, Ohio, May 8, 1929, to Gordon R. Brown and Hermina Krohn Brown. Anna married F. Leon Johnson on September 5, 1952 in Middle Point, Ohio. They lived near Antwerp, Ohio until moving to their farm near Bluffton in 1955. A 1947 graduate of Hoaglin-Jackson High School near Van Wert, Ohio, she worked as a secretary to the Marsh Foundation Trustee and Marsh Foundation Farm Office in Van Wert. Anna enjoyed many hobbies such as sewing, knitting, quilting, painting and putting together puzzles. Anna was a wonderful seamstress, and she also loved to travel. She was a member of the Six Mile Church where she taught Children’s Sunday School for many years, along with serving as Sunday School superintendent and member of the Board of Deacons. Anna was a member of the Poplar Grove Extension Homemakers Club where she served as President, Vice President, Treasurer, and worked on multiple committees. She was also a member of the Wells County Historical Society. Survivors include her husband of 68 years, Leon of Bluffton, her five children, Marcia (Jim) Hotopp, Stan (Diane) Johnson both of Bluffton, Elaine (Gary) Seidner of Montpelier, Sheila Beckman of Kendallville, and Teresa (Bruce) Ley of Ossian; 13 grandchildren; and 18 great-grandchildren; one sister, Bea Davidson of Jacksonville, FL; two brothers, William Brown of Stryker, Ohio and Art Brown of Middle Point, Ohio. She is preceded in death by her parents, a son-in-law Greg Beckman and a great grandchild Hadassah Seidner. A private family funeral service honoring Anna will be held at the Thoma/Rich, Lemler Funeral Home in Bluffton with Pastor Steve Studebaker officiating. Burial will follow at Six Mile Cemetery near Bluffton. Preferred memorials may be made in Anna’s memory to the Six Mile Church. Funeral arrangements have been entrusted to the care of the Thoma/Rich, Lemler Funeral Home in Bluffton. Friends can send online condolences to the family at www.thomarich.com.

The family of Anna Leona (Brown) Johnson created this Life Tributes page to make it easy to share your memories.