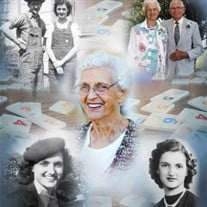 Anna Emojean Brown, 95, of Bluffton and formerly of Montpelier, passed away on Thursday evening, December 27, 2018, at River Terrace Estates in Bluffton. She was born on November 13, 1923 in Rockcreek Township, Wells County to Charles B. & Mary “Molly” (Reece) Inskeep. She graduated from Rock Creek High School in 1941. Emojean worked at General Electric in Fort Wayne and at Western Union where she delivered singing telegrams. She also worked at Caylor-Nickel Clinic for many years. She was a homemaker and devoted mother and grandmother. Emojean was a member of Bethel Church in Bluffton and also belonged to Busy Bees and Jolly Workers Home Extension Clubs. She enjoyed living at River Terrace for the last 11 years where she excelled at Wii Bowling and playing Rummikub. On November 25, 1943 in Liberty Center, Emojean married Edwin V. Brown, and he preceded her in death on February 14, 2011. Surviving are two sons, Darrell Brown (wife: Connie) of Montpelier, Marvin Brown (wife: Mary) of Montpelier; three daughters, Gloria Osborn (husband: Bruce) of Bellevue, Washington, Marcia Davey (husband: Tom) of West Lafayette, Indiana and Cindy Young (husband: James) of Cedar Rapids, Iowa along with 31 grandchildren and 48 Great-grandchildren. In addition to her parents, she was preceded in death by a daughter, Saundra Brown in 2015, a grandson and two great-grandsons along with five siblings; Dorotha Rochon, Mary Esther Line, Virginia Lieurance, Charlene Young and Bill Inskeep. Calling hours will take place on Monday from 4 P.M. to 8 P.M. at the Thoma/Rich, Lemler Funeral Home in Bluffton. Funeral services will be held at 10 A.M. on Tuesday (Jan. 1st.) at the funeral home with Pastor Pat Harris officiating. Burial will follow at Alberson Cemetery. Preferred memorials are to the Family Lifecare or The Gideon’s – Wells County Camp. Funeral arrangements have been entrusted to the care of the Thoma/Rich, Lemler Funeral Home in Bluffton. Friends can send online condolences to the family at www.thomarich.com.

Anna Emojean Brown, 95, of Bluffton and formerly of Montpelier, passed away on Thursday evening, December 27, 2018, at River Terrace Estates in Bluffton. She was born on November 13, 1923 in Rockcreek Township, Wells County to Charles... View Obituary & Service Information

The family of Anna Emojean Brown created this Life Tributes page to make it easy to share your memories.

Anna Emojean Brown, 95, of Bluffton and formerly of Montpelier,...

Send flowers to the Brown family.