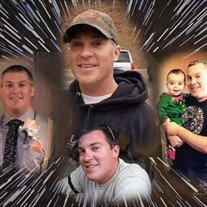 Allen D. Bricker, 37, of Bluffton, died Friday, Nov. 12, 2021. Allen was born Aug. 7, 1984, in Fort Wayne to Elaine Bricker and Richard “Dick” (Linda) Bricker; they all survive in Bluffton. On May 6, 2017, he married Jessica Williams Bricker; she survives in Bluffton. He graduated from Bluffton High School in 2003, where he ran track and cross country. He started working for the City of Bluffton Electric Department later that fall. He was a proud lineman who answered the call of duty day or night, rain or shine. Allen could talk endlessly about Star Wars, history and Lego. He enjoyed watching old movies and playing video games with his friends. He loved coaching and volunteering for the Wells County Girls Softball League. On June 1, 2019, his namesake Finn Allen Bricker was born. He survives in Bluffton. Additional survivors include a brother, Kyle (Erin) Bricker of New Haven; in-laws, Jan and Jerry Williams of Huntington, Jeremy (Alicia) Williams of Warsaw and Jenessa (Shelby Cascanette) of New York; numerous aunts, uncles, cousins, nieces and nephews; and countless friends. He was preceded in death by his grandparents, Robert and Dorothy Bricker and Theodore and Kathryn Witte. Calling hours are from 2 to 8 p.m. Thursday, Nov. 18, at Thoma/Rich, Lemler Funeral Home and from 10 to 11 a.m. Friday, Nov. 19. A service will be held at 11 a.m. Friday at the funeral home with Pastor TJ Lynch officiating. A graveside service led by Jeff Lemler will follow at Fairview Cemetery. Please come as you are — or even wear a Star Wars shirt. In lieu of flowers, memorials may be made to the family for Finn’s future in the care of the funeral home, 308 W. Washington St., Bluffton, IN 46714, or to the Wells County Girls Softball League, P.O. Box 18 Bluffton, IN 46714. The family would like to thank the community for its support during this difficult time. Allen’s arrangements have been entrusted to the care of the Thoma/Rich, Lemler Funeral Home in Bluffton. Friends can send online condolences to the family at www.thomarich.com.

The family of Allen D. Bricker created this Life Tributes page to make it easy to share your memories.

Send flowers to the Bricker family.