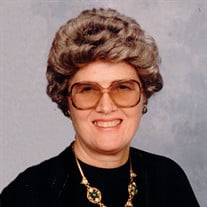 Adeline C. “Dody” Schwartz, 95, of Uniondale, Indiana passed away at 8:00 P.M. Thursday, April 13, 2017, at Heritage Pointe in Warren. Mrs. Schwartz was born on December 12, 1921 in New Haven, Indiana to Herman F. & Clara S. (Moeller) Rebber. She graduated from New Haven High School in 1940 and attended Lutheran Hospital School of Nursing from 1942 to 1945. She faithfully served her country from 1945 to 1947 as a Second Lieutenant in the Army Nurses Corp. After the War, she worked as a RN for the Wells County Hospital and Caylor-Nickel Clinic. Dody retired in 1988 as the Wells County Health Department Nurse after 18 years, where she traveled all over Wells County and went to family’s homes to provide care. She served on the Executive Board for Community and Family Services in Wells County, now Wells County Council on Aging. She was a faithful member of St. Mark’s Lutheran Church in Uniondale where she was the secretary of the Woman’s Auxiliary and taught Sunday school and helped with Bible school. On April 21, 1946 in Louisville, Kentucky, Dody and George E. Schwartz were married. They shared 65 years of marriage together before he preceded her in death on February 16, 2011. Dody is survived by a daughter Jacqueline Evans of Richmond, Virginia and three sons; Geoff J. (wife Carolyn) Schwartz of Upland, IN. Tim K. Schwartz of Bluffton and Brian D. (wife Kay) Schwartz of Fort Wayne. She is also survived by 6 grandchildren and 5 great-grandchildren. She is preceded in death by siblings: Donald R. Rebber, Dorothy Buuck, Robert Rebber, Wilma Hieber, Lelah Spencer, Leonora Scheumann, Eleonora Newhouse and Herman Rebber, Jr. Friends are invited to visit with Dody’s family from 1 to 3 p.m. on Friday (April 28, 2017) at the Thoma/Rich, Lemler Funeral Home in Bluffton. The memorial service will follow calling hours at 3 P.M. on Friday at the Thoma/Rich, Lemler Funeral Home in Bluffton. Pastor Michael Tamorria will officiate. Military honors will be performed by the United States Army and the American Legion Post #111 Honor Guards. Burial will take place at Elm Grove Cemetery in Bluffton. In lieu of flowers, the family requests memorials may be made to the St. Mark’s Lutheran Church. Friends can send online condolences to www.thomarich.com.

The family of Adeline "Dody" C. Schwartz created this Life Tributes page to make it easy to share your memories.

Send flowers to the Schwartz family.